Book Beginnings on Friday is a meme hosted by Katy from A Few More Pages. Anyone can participate; just share the opening sentence of your current read, making sure that you include  include the title and author so others know what you’re reading.

This was my Waiting on Wednesday book.  It came in the mail Wednesday and I have already finished it.  Timeless by Gail Carriger is the last Alexia Tarabotti novel.  I have to applaud Gail for stopping the series instead of continuing until it got old.  Timeless left me wanting more.  Of course there will be a new series featuring Alexia and Conall’s precocious child. 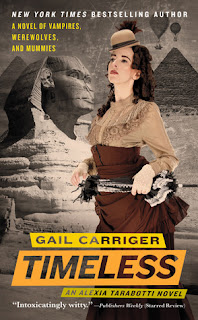 Here is how Timeless begins:
I said no such thing,” grumbled Lord Maccon, allowing himself, begrudgingly, to be trussed in a new evening  jacket.”
Here is what Goodreads has to say about Timeless.
Alexia Tarabotti, Lady Maccon, has settled into domestic bliss. Of course, being Alexia, such bliss involves integrating werewolves into London High society, living in a vampire’s second best closet, and coping with a precocious toddler who is prone to turning supernatural willy-nilly. Even Ivy Tunstell’s acting troupe’s latest play, disastrous to say the least, cannot put a damper on Alexia’s enjoyment of her new London lifestyle.

Until, that is, she receives a summons from Alexandria that cannot be ignored. With husband, child, and Tunstells in tow, Alexia boards a steamer to cross the Mediterranean. But Egypt may hold more mysteries than even the indomitable Lady Maccon can handle. What does the vampire Queen of the Alexandria Hive really want from her? Why is the God-Breaker Plague suddenly expanding? And how has Ivy Tunstell suddenly become the most popular actress in all the British Empire?

Comments Off on Book Beginnings on Friday, March 2, 2012