“Waiting On” Wednesday is a weekly event, hosted by Jill at Breaking the Spine, that spotlights upcoming releases that we’re eagerly anticipating. 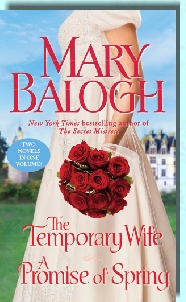 I was just in Walmart and saw The Temporary Wife/A Promise of Spring by Mary Balogh out for sale.  I have it pre-ordered from Amazon but they have not mailed it out yet so I am waiting.  This is a reissue of two of Mary Balogh’s early books out in one volume.  Here is what Amazon has to say about the two books.

The Temporary Wife
Miss Charity Duncan has no illusions about Lord Anthony Earheart’s proposal. The arrogant aristocrat has made it painfully clear what he wants: a wife who will enrage the father he despises and then disappear from his life. In exchange, Charity’s family will receive the money they desperately need. But after Charity agrees to this mockery of matrimony, she soon discovers a startling fact: She has fallen for Anthony, and breaking their marriage vows may also break her heart.

A Promise Of Spring
Grace Howard has every reason to be devoted to Sir Peregrine Lampman. After all, the gallant gentleman rescued her from poverty by making her his bride. Even more nobly, he did not withdraw his affection after she confessed to a youthful folly that had compromised her virtue. But Grace did not tell the whole truth about the handsome lord who betrayed her—and now the one thing she’s kept from Perry threatens to destroy her last chance at true love.